Anglers across the country are gearing up for the start of a spring fishing season that will likely be different than past seasons – at least where gear is involved.
From Maine to Alaska, anglers wading into waters in 2011 will have to contend with regulations and advisories concerning the use of felt-bottomed wading boots. Maryland and Vermont have banned the use of felt-soled waders and wading boots starting this year and Alaska is set to follow suit in 2012. At least three other states – Oregon, Montana and Maine – are considering bans on felt-soled boots that have been implicated in the spread of aquatic nuisance species like Didymo (or “rock snot”). 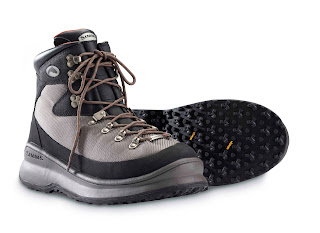 Simms Fishing Products took the fly-fishing industry’s lead on this issue in 2009 – voluntarily removing felt-bottomed wading boots from their product line. As the industry’s leader in Vibram® soled wading boots, Simms offers these tips and tactics for anglers figuring out how best to go felt-free this year as the “rubber meets the rowed.”

About Simms’ line of StreamTread® footwear.
In 2010, Simms became the first fly-fishing manufacturer to discontinue the use of felt in its wading boot line. For 2011, Simms is offering seven models of Vibram® soled wading boots, including the new RiverTek® featuring Boa® lacing system and a women’s specific boot